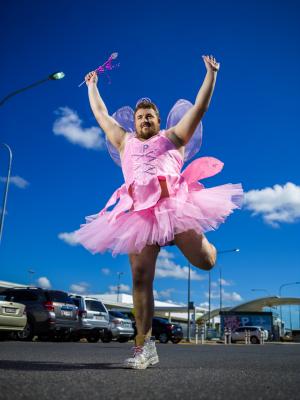 The "Parking Fairy" jumped for joy at the news Cairns Airport has won the award for Outstanding Marketing & Communications in this year’s national Parking Industry Awards.

The prestigious Parking Industry Awards celebrate the achievements of individuals, teams and organisations for excellence, outstanding facilities and innovation throughout the parking sector. Through showcasing best practice and rewarding exceptional contributions, the Awards aim to highlight the industry’s commitment to raising the standards of the parking industry.

Entries to the 2017 Parking Industry Awards were judged by a panel of ten international and national leaders working in the parking industry.

The announcement of Cairns Airport’s win was made at the gala awards night in Sydney on Monday and representatives of the Cairns Airport Marketing and Ground Transport teams were thrilled to accept the award for the airport’s "Meet the Parkers" campaign.

"We are really honoured to have received this award, given we were up against finalists of the calibre of Brisbane and Sydney Airports and national car park operators," Ms Groves said.

"The airport team worked closely with Jason Smith and his Cairns based advertising and media agency, Red Carrot, to develop the "Meet the Parkers" creative. The main aim was to let people know that parking at Cairns Airport can be an affordable as well as convenient option."

"The campaign features characters who embody some of the most common traits people exhibit when they are parking. It was great fun coming up with these characters, but there was also marketing science applied to the process to ensure they displayed traits we can all identify with."

"The final line up included "Mr ‘there’s always a closer spot’", "The Perfect Parker", "the guy who sees parking fairies", and of course the popular "Parking Fairy" himself."

"It was important to us that we use local talent in the campaign so once we’d agreed on the characters, we worked with Red Carrot to conduct auditions and we found the perfect people to play these parts."

"Red Carrot came up with the creative storyline using a narrator to tell how each of the characters uses Cairns Airport Parking. The story was then developed into our award winning series of television and cinema commercials, print advertisements including billboards and online promotions."

Jason Smith of Red Carrot said he is so pleased for all involved to be honoured with the award.

"I’m very proud of the team of local actors and crew used in this production," Jason said. "We have some truly talented, local professionals that can mix it with the best in the country and this award definitely confirms that. Special mention to Paul Smith at YFilms for understanding and bringing this idea to life."

"I can’t thank the amazing Cairns Airport team enough for allowing us to develop and execute this creative. We had a lot of fun, and late nights, producing this campaign. We’re now shifting our focus to a new and exciting campaign for Cairns Airport currently in development. Stay tuned for another great opportunity for locals to be involved."

The new Cairns Airport campaign will promote another aspect of the airport’s business and talented locals are urged to keep an eye out on the Cairns Airport Facebook page or website for more information on how they could be part of it.