Airport and TTNQ collaborate as region readies for interstate visitors

As the Far North readies itself for the easing of some Queensland border restrictions on Friday, Cairns Airport and Tourism Tropical North Queensland have joined forces in an innovative new campaign that reflects the return of travel is a little different.

With more scheduled flights arriving in Cairns from the end of the week, Cairns Airport and TTNQ have teamed up for a campaign aimed at ensuring the safety and wellbeing of travellers to the region. The campaign will be launched tomorrow at Cairns Airport and has already been well received by the Far North’s tourism industry, with over one hundred downloads of the collateral by tourism operators from TTNQ’s website.

The campaign includes many images shot by local photographers and reflects the Tropical North’s distinct imagery and brand.

“We want our visitors and our tourism operators to continue to do the right thing to protect against COVID-19 and this signage is a friendly reminder of how to stay safe,” he said.

“I’m sure visitors to the Cairns and Great Barrier Reef region will appreciate the fun take and we will see the signs being shared on social media.”

Cairns Airport Chief Executive Officer Norris Carter said the airport had been busy finalising preparations for the increase in interstate visitors and flights scheduled from later this week, after its T2 Domestic Terminal upgrade and the runway overlay project and was very excited at the prospect of welcoming more interstate visitors back to Cairns.

Last week Cairns Airport saw 47 percent growth in domestic passenger numbers compared to the week before, with increased capacity from Brisbane for the school holidays.

“This has been an incredibly challenging time not only for the aviation industry but for tourism operators across the Far North, and the airport as the gateway to the region, is delighted to have teamed up for a campaign focussing on the wellbeing and safety of travellers as they return to the region, Mr Carter said.

“We want people to understand that airports and air travel is safe and to welcome travellers back to this beautiful part of the country.”

“The campaign uses the power of imagery to creatively reinforce the key public health messaging in a way that is positive, inspirational and accessible. It also instils some excitement in this post pandemic era, from the minute travellers arrive at Cairns Airport to start their holiday”, Mr Carter said.

The full campaign toolkit for operators can be downloaded from Tourism Tropical North Queensland’s website: tourism.tropicalnorthqueensland.org.au 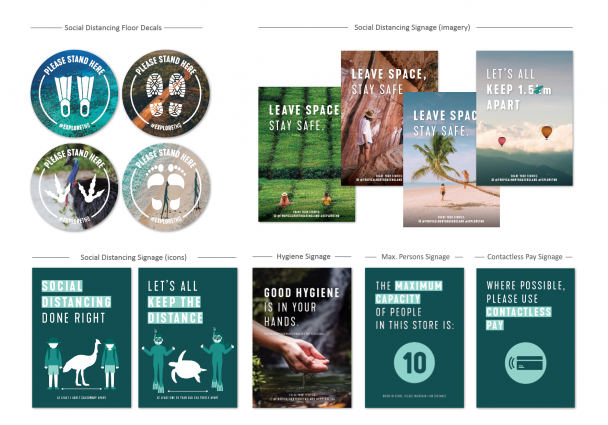